Rent a Limo or Party Bus

Tom founded Motortoys Limousine and Party Bus in 2005 with 1 limo, and a lot of hopes and dreams.

Half of all new businesses fail, so people that knew us weren’t sure what we were thinking.

We weren‘t sure either.

Tom drove for the first four years before we got too big for him to keep doing that. He happily admits that if he still drove, “He’d be the worst chauffeur we have.” Now he leaves it to the experts that we employ here. We have chauffeurs that have been with us for over a decade. They’re more friends than employees, and MotorToys’ customers love them.

MotorToys Limo has no partners or investors. Profits are put right back into the business. Our third limo back in 2007 was an H2 Hummer luxury limo. Then we bought a luxury party bus to get into the Cincinnati party bus rental part of the industry and other stretch limos soon followed.

We grew right through the recession of 2007 because so many other Cincinnati party bus and luxury limo companies closed.

We rented space in Blue Ash right by I-71 at a place called The Design Center. It’s very distinctive because the paint is bright red, yellow and blue (you can see it as you drive down I-71). But we quickly outgrew it. We moved two more times after that, but outgrew them both. In 2017, we bought a couple of acres in Loveland, near the Loveland Indian Hill exit off I-275. Great accessibility to all of the Tri-State area. No more moving. Yay!

As Cincinnati party bus rentals grew, we invested in more brand-new, high-end buses. Now, we have eight luxury party buses for rent. We also have a dozen stretch SUV luxury limos (including several stretch H2 Hummer limousines), sedan limousines, and more. By 2019, we were one of the largest Cincinnati party bus and limousine services in the area. It’s all rather humbling.

The Limo Industry in Cincinnati can be aggravating

Most people rent a Cincinnati party bus sight unseen, which enables the bad guys to stay in business. While some companies buy old school buses, paint them black, and call them a cheap party bus (usually without mentioning that there is no air conditioning – yuck), we only buy limousine buses.

We buy them brand-new from high-end coachbuilders. We rent them at virtually the same prices as those so-called cheap party buses. We also decided early on to only buy luxury party buses with onboard bathrooms. That may seem unimportant. But when you’re out having fun with 25 people, it sure is nice not to pull over every 10 minutes.

Best decision we ever made!

Our commitment to quality wedding limo service started showing early on at a wedding website called The Knot.

We’d never heard of it, and we’re pretty bad at bugging people to post reviews.

But for some reason, we have a lot of reviews on The Knot. Really a lot. While most limousine services in Cincinnati have 5 to 10 positive reviews, we have well over 200. Kudos to our chauffeurs – they’re getting the credit they deserve.

We also have a lot of repeat business for Cincinnati party bus and wedding limo rentals. People see our wedding limo service and then hire a luxury party bus later.

It’s touching how many people use us over and over.

We have a lot of parents calling us for their child’s wedding limo service because they used us for their prom back in the day.

Then the kids, now adults, call us for their anniversary. If you like the idea of being part of a family-owned business that knows who you are and a business that you can keep coming back to with confidence – that’s us.

15 years have gone by quickly.

On a personal note – for those people who have watched our children grow up with yours – my daughter is the one in blue (fifth one from the right) in the picture below. This was taken during Loveland’s prom in 2019. She’s jumping up and down next to her best friend. They’re all going off to different colleges this year, but they’ll all have the memories of their time together in the limo. Limos really help bond people together.

That’s why we love this company.

Rent a Limo or Party Bus 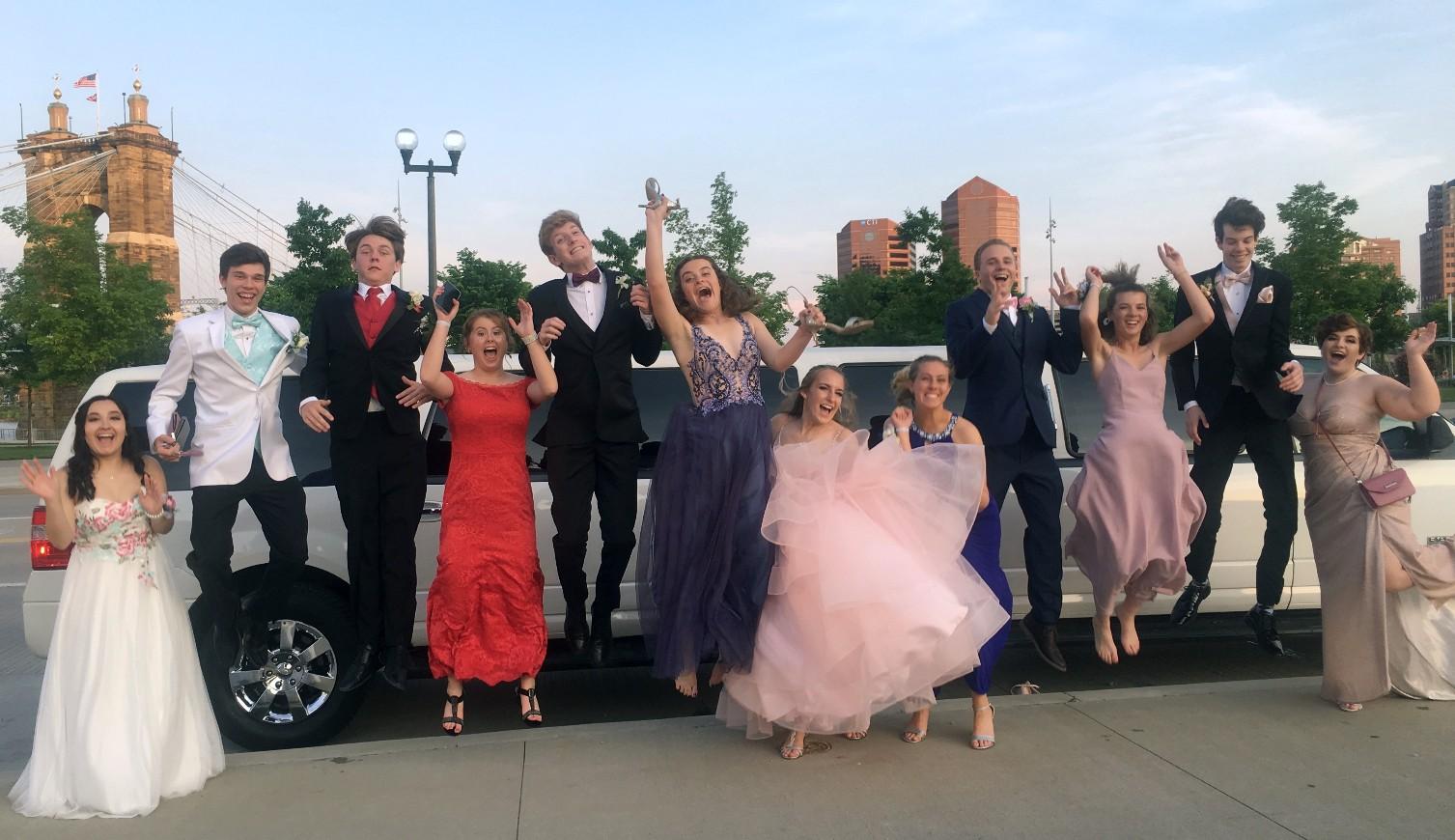